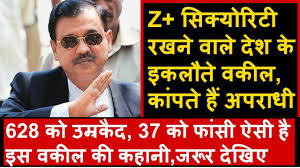 He is a public prosecutor with the acumen and necessary qualities to become the top most lawyer of India. However, he has always preferred to serve the nation rather than making money.


Ujjwal Nikam is known for taking very tough cases like 1993 Blasts of Mumbai, Gulshan Kumar Murder Case, 2008 Mumbai Attacks and Pramod Mahajan murder case, among others. And, in all cases, he showed how a lawyer can serve the nation. He brought the truth and helped India to make a positive image in the International arena.


Profile of Ujjwal Nikam
Ujjwal basically belongs to Jalgaon, Maharashtra. His father Deoraoji Nikam was a well-known lawyer who had later become a judge. People of Jalgaon still remember the honesty and integrity of Deoraoji.


Ujjwal was first not inclined to become a lawyer. He did B.Sc. However, when he saw how his father is serving poor in getting justice, he decided to do the same. He got law degree from Jalgaon and became a District Government Public Prosecutor of his home district. However, destiny had written something else for him.

Fees of Ujjwal Nikam
There is no denying that Ujjwal Nikam is one of the most known and respected criminal lawyer of the country. But, you will be surprised to know his fees. He charged only Rs. 10, 000 for one day of hearing. At the same time, you should know that criminal lawyers of his statures are charging more than Rs. 5 lakhs for one hearing.
He is doing everything for the sake of India, to make the country’s image vibrant and justified in the International arena.


Son of Ujjwal Nikam
The name of the son of Ujjwal Nikam is Aniket Ujjwal Nikam. He is also a lawyer. His appointment as the legal advisor to the Civic body created flutter in the politics of Maharashtra. He is considered close to the NCP. In fact, he fought a case filed by the BJP against the irrigation scandal done under the nose of senior NCP leader and the former irrigation minister of Maharashtra, Mr. Ajit Pawar.


As a matter of fact, both Ujjwal and his son are apolitical. They have never shown any inclination to become close to any political parties.

While asking questions from David Headley on 26/11, Ujjwal did a great service to the mother India by bringing the reality of Ishrat Jahan. Ujjwal goaded him to tell about the women wing of the LeT and Headly replied by admitting that Ishrat Jahan was a suicide bomber of the terrorist organization. This should give some sort of shame to those political parties who are doing great disservice to the nation by promoting antinational and terrorists like Ishrat Jahan.
Labels: Fees and Wife profile PROFILES Son Ujjwal Nikam Wiki
Location: India