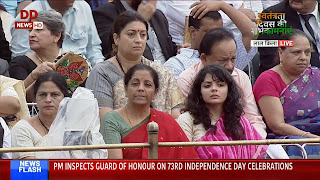 Nirmala Sitharaman is married to Parakala Prabhakar, a Ph. D. from the prestigious London School of Economics. They have only one child – a daughter named Parakala Vangmayi. Naturally, Vangmayi is close to both Nirmala and Prabhakar – the former adviser to the Government of Andhra Pradesh. With love, the parents are also required to fight for the privacy of their daughter. People are frenetically looking for some personal information about Vangmayi, but she has successfully concealed them.
If you take a look at Social Media profiles of Vangmayi, like that of her Facebook Profile, you will find very limited information about her. She has commendably averted all attempts by unknowns to intrude her privacy.
Parakala Vangmayi was born in 1991. Her date of birth is just one day before the assassination of Rajiv Gandhi. She was born on 20th May, 1991 in Chennai. Rajiv Gandhi was also assassinated near Chennai and hence there was curfew in the city when Vangmayi came to the planet Earth. Nirmala had to be confined in the hospital for long and only a doctor’s vehicle attached with a white flag could take her to home from the hospital.
At this juncture, Vangmayi’s age is 24 years.
Parakala Vangmayi did schooling from Hyderabad. Later, she took admission in Delhi University. She is currently residing in New Delhi with her mother while her father stays in Hyderabad due to his professional commitment.


Vangmayi is NOT an Army Officer

A post had become viral over social media claiming that Vangmai works with the Indian Army. An image showing a woman army officer with that of Sitharaman was shown to give credence to this 'wonderful' news. However, it was completely a fake story.

As mentioned above, Vangmayi is still studying. She has plans to go for higher studies.