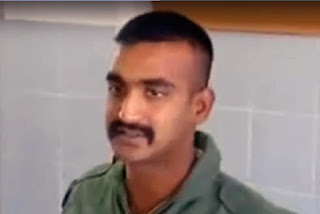 Abhinandan Varthaman is a Wing Commander of Indian Air Force. He was arrested by Pakistani Army on 27th February when PAF shoot down his jet. A video was released by the Pakistani establishment where Abhinandan was seen disclosing his identity. He was profusely bleeding, but was admirably calm and composed. As per Geneva Convention, he will be released on 1st March. Pakistan being in a sort of serious economic problem doesn't want any escalation and hence ready to let him go. Abhinandan is an experienced pilot.

That's why he survived. He could have been killed. He was on MiG - 21 Bison - the coffin on Air. This jet is scheduled to be retired by the end of 2019. India desperately needs Rafale to handle this type of tricky confrontation in air. He was on Operational Readiness Platform when IAF sensed incoming 20 F - 16 fighter planes. Abhinandan immediately scrambled his MiG to chase F - 16 back. He shot down one F - 16 and also got hit by ground firing. That he shot down a 4th Generation US made F - 16 by 1962 MiG is something remarkable. It is like you are chasing a BMW with LML Vespa scooter.

Abhinandan was first brutally thrashed by Locals. It is believed that one of his eyes and nose was badly hurt. See the following video where locals are beating him and Pakistani rangers are trying to save him. 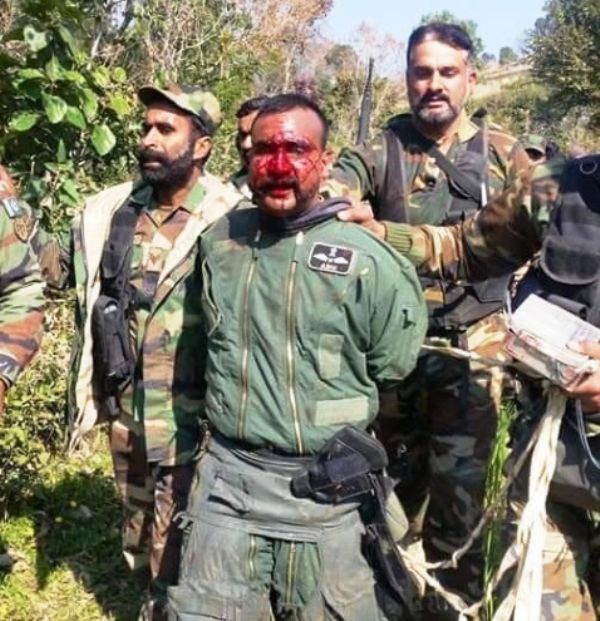 MiG - 21: Only some African countries and North Korea use this aircraft. It was first produced in 1956. The production stopped in 1985. India is still using it. There is NO way Abhinandan can fight F - 16 with MiG - 21. Still, he did. The brave soldier. he is.

According to sources, Abhinandan Varthaman is from Tambaram, a residential area in the southern part of Chennai while his ancestral background is from Kancheepuram, Tamil Nadu. Abhinandan Varthaman is a MiG 21 Bison Pilot. He was born on 21 June 1983 (age 35 Years; as in 2018). Reportedly, he was commissioned into the Indian Air Force on 19 June 2004.

Abhinandan’s father, Simhakutty Varthaman is a retired Air Marshal of the Indian Air Force. Simhakutty has also served as the Air Officer Commanding-in-Cheif in the Eastern Air Command. His service number is 13606. Abhinandan’s mother’s name is Shobha who is a doctor. 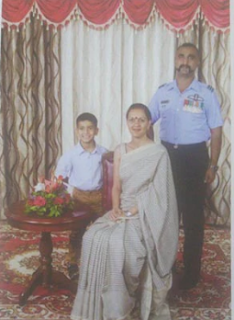 He is married to Tanvi Marwaha, who has served the Indian Air Force as a Squadron leader for 15 years. The Service Number of Tanvi Marwaha is 28800. She has also done the Armed Forces Executive Course from IIm Ahmedabad. At present, Tanvi Marwaha is working as the DGM of Reliance Jio in Bengaluru.

A simple search on Google using keywords "Abhinandan Varthaman wife" led us to an article published on Samayam Telugu website that carried the story of Abhinandan's wife -- Tanvi Marwaha -- a former Squadron Leader, and had her photo in the report. 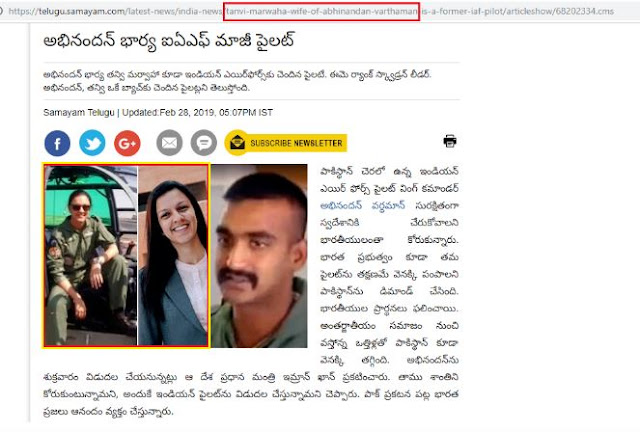 Father: Simhakutty Varthaman, a Retired Air Marshal of Indian Air Force. It may be noted that Simhakutty had worked with Priyadarshan for a movie named Kaatru Veliyidai where protagonist is also captured in Pakistan.